Written by guest blogger, Kat from You Fancy Thing

You know when you were a kid, and homemade playdough always smelled weird, and was gritty and salty, or slimy, or made your hands sting?

This stuff isn’t any of those things.

I adapted this recipe from here, and it is by far the best homemade playdough I’ve encountered thus far. It’s smooth and elastic, and even though it’s food-based, it tastes gross so no one should actually enjoy eating it (though don’t, like, test this out by serving it to your kids for dinner), it’s reusable (it just needs a good kneading each time you take it out, and voila! it’s as good as new), and it lasts for up to 4 days in the fridge (or more, depending on how often you use it. Ours never lasts past the 4 day mark because generally Innis wants to build playdough elephants and dump trucks and snakes every single day).

UPDATE: I made an extra batch of playdough recently and left it in the fridge until we were ready to use it. It was just as good as new when we eventually opened the tupperware, a week and a half later. So basically, this stuff would outlast even the cockroaches after a nuclear apocalypse.

Here’s what you need (plus some water): 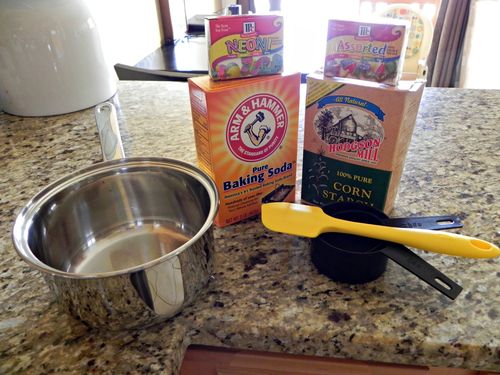 Mix dry ingredients in your sauce pan, set aside. Squeeze some food colouring into the 3/4 cup of water, and then add this water mixture to the soda and corn starch. I didn’t count the drops of food colouring I used, I just squeezed the bottle for about two seconds. A smarter person would have used a clear measuring cup to gauge the colour to water ratio during the actual combining part, but, well. 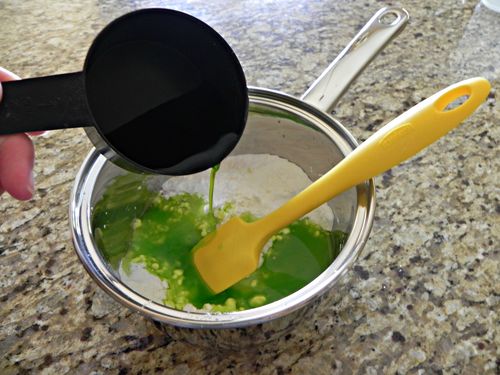 Blending the food colouring with the water ensures that your playdough will be evenly hued. 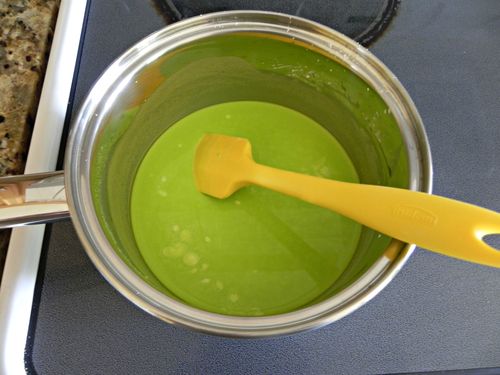 Cook at medium heat, and stir constantly until your playdough gets … playdoughy — the constant stirring is important, but don’t worry, it doesn’t take long. In about a minute and a half, your playdough will get all foamy on top and then pretty much twenty to thirty seconds right after that, you shall reach the pinnacle of desired playdough consistency: 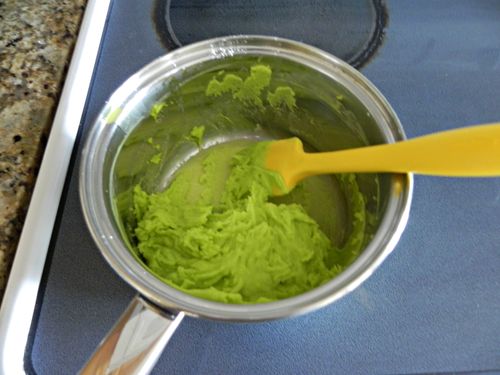 Scoop your playdough out onto a plate to cool, wash out your sauce pan (it’ll have stuff stuck to the bottom, but it’s important to start with a clean pan each time so you can keep your colours nice and crisp), then repeat until your desired number of pretty playdough colours has been reached:

Knead your playdough until it’s nice and smooth (you’ll encounter some dried up bits on the surface, but these will blend in nicely, so don’t worry). If you find that your playdough is a little sticky, just add some more baking soda (just like you would add flour to overly-moist pastry) until it’s the consistency you like: 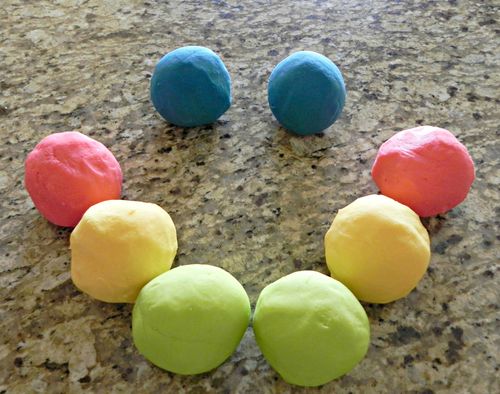 It’s better to store slightly moister-than-desired playdough rather than the slightly parched variety because it’s inevitable that your playdough will dry out a little bit in the fridge (even if you put it in an airtight container).

I divided each of the colours in half, then cut each of those balls in two so I ended up with four smaller balls of each colour instead of one giant one. This makes sharing easier during play dates, and they also fit better into my tupperware as itty bitty versions of themselves: 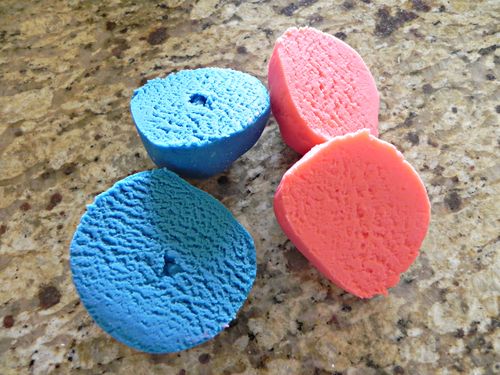 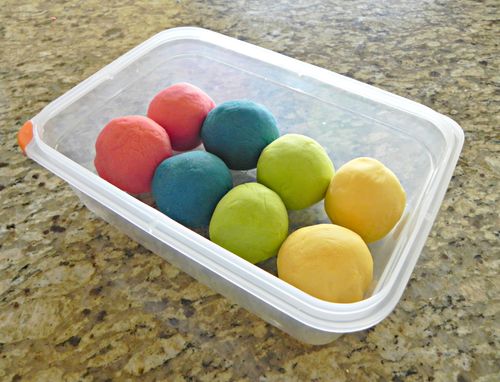 This entry was posted in baby stuff, crafts for kids, tutorials and tagged homemade, how to, playdoh, playdough, recipe. Bookmark the permalink.